Terence is our new Master (again)

At the meeting of Brierfield Lodge on 19th March 2019, WBro Terence Michael Rebanks was installed – for the 4th time – into the Chair of King Solomon, by the WM, WBro Michael Maunders who was completing his 5th (and 2nd consecutive) year in the Chair. 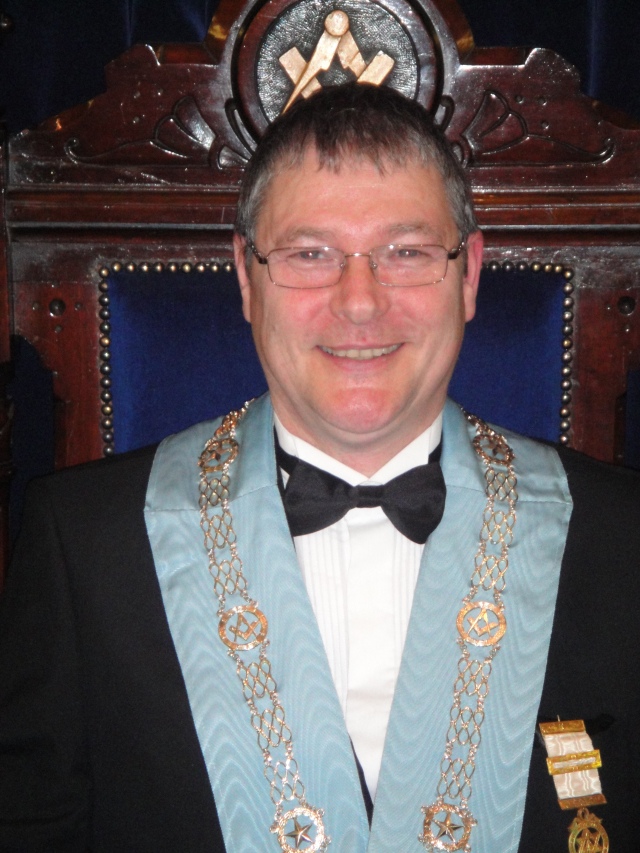 Following the Installation ceremony, Lodge members and their guests enjoyed an excellent festive board of Salmon Mayonnaise, Roast Lamb, Lemon Meringue Pie and a Cheese Board. In keeping with recent practice at Brierfield Lodge, there was no soloist to sing the Master’s Song – all present took part, aided by printed song sheets, to the musical accompaniment of our guest pianist, WBro David Hawkins of Colne Lodge. Proceedings over by 9.15 pm, we were all on our way home earlier than a regular Lodge night!

Michael takes the Chair for the 4th time

At the meeting of Brierfield Lodge on 21st March, WBro Michael Maunders was installed – for the 4th time – into the Chair of King Solomon, by the Director of Ceremonies, WBro David Biggs, who had been acting as WM pro tem, following the death of our Master, Bro Maurice McGaffin, last September. 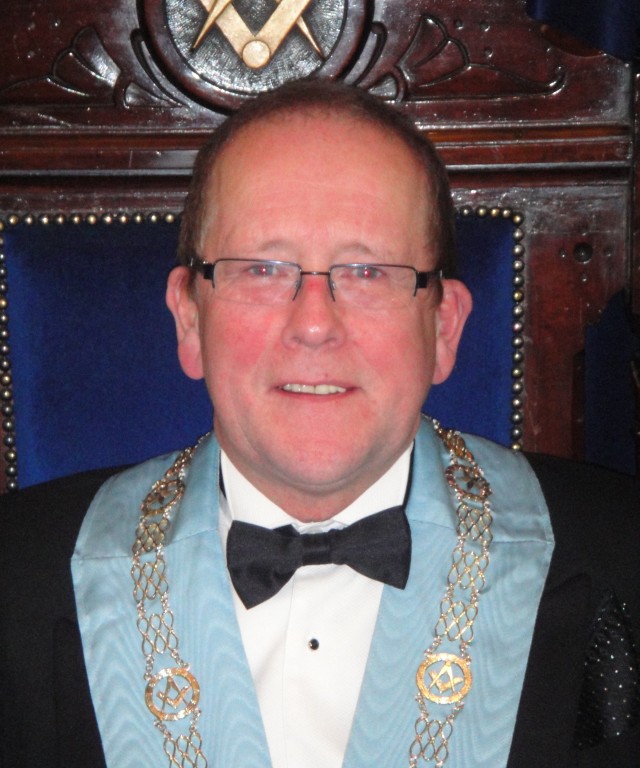 A very respectable contingent of visitors was present to support the Lodge, and enjoyed an albeit abbreviated ceremony followed by an excellent festive board of Pate & Toast, Fillets of Sole Veronique, Stick Toffee Pudding with Ice Cream and a Cheese Board.

It is with great sadness that we report that our WM, Bro Maurice McGaffin, passed to the Grand Lodge Above on Tuesday 27th September 2016 after a brave battle with cancer.

Maurice will be sadly missed by all the members of Brierfield Lodge and our sister Lodges meeting at Padiham and we extend our sympathy to his family and friends.

After opening the Lodge and conducting the preliminary business, the Worshipful Master, Bro Maurice McGaffin, announced that the next business was to receive the Right Worshipful Provincial Grand Master accompanied by a Provincial Deputation. 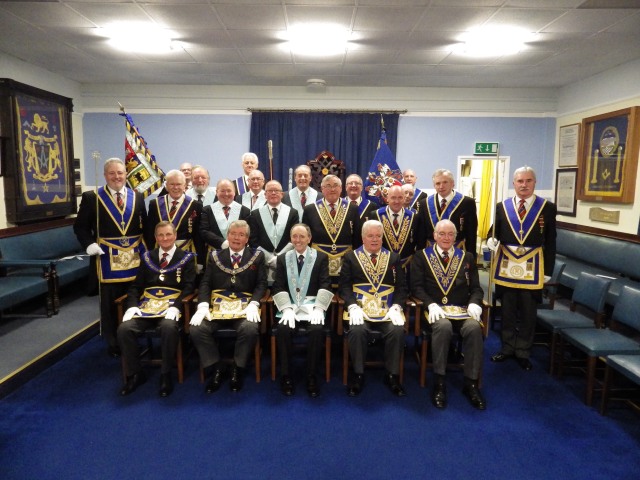 The Worshipful Master welcomed the Right Worshipful Provincial Grand Master and to his great delight Sir David accepted the gavel and took his place in the Masters chair. The RWPGM was then saluted in due form.

There followed a presentation entitled “From Junior office to the Masters Chair”. This was given by four Brethren ranging from a Fellow Craft who has taken on the office of Assistant Secretary to a Past Master, relatively recently through the Chair. All related their experiences and the progress they had made whilst moving through their various Offices to date. They also outlined their hopes and expectations for the future and the support and assistance they would need in their development. The topic was introduced by WBro Steve Jansen, the Burnley and Pendle District Mentor who had worked with the Brethren in their preparations. 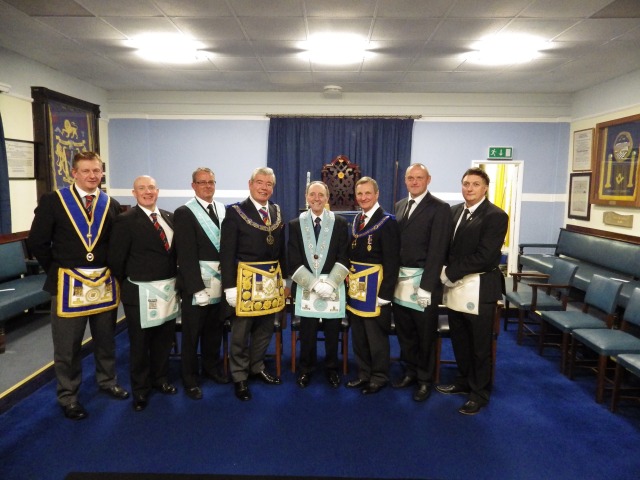 The RWPGM said that in coming to Padiham he knew that it would be a good evening but it had exceeded his expectations; the presentations had been some of the best that he had seen and he thanked WBro Jansen and the four presenters for their efforts. He also commented on some of the issues that had been raised.

The Social Board was well attended but unfortunately the WM was unable to stay and WBro Geoffrey Riley took the Masters’ place.

The usual toasts were proposed and duly honoured. WBro Michael Maunders proposed the toast to the RWPGM commenting that it was a pleasure to welcome him to Padiham for his second visit.

In his response, Sir David thanked everyone for the support that had been given to the 2015 Festival and stated that we should be very proud of our efforts in raising £2.6 million in such a difficult financial climate.

WBro John Farrington then proposed the toast to the WM, in his absence and to Brierfield Lodge. He asked that the best wishes of all present be passed on to Bro McGaffin. He thanked the Brethren who had given the presentation and Brierfield Lodge for hosting the meeting; he wished them all well for the future in their relatively new home at Padiham, commenting on the smooth transition and integration from Nelson following the closure of that Hall. WBro Geoff Riley gave a formal response and at 9.50 pm the Tylers toast concluded an excellent evening. 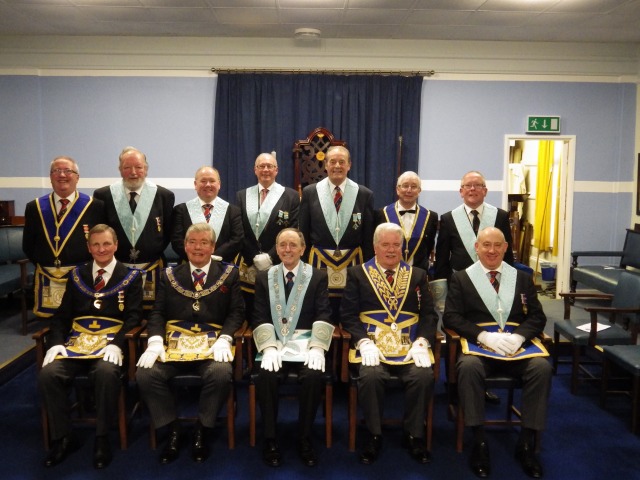 Brierfield Lodge celebrated the long-awaited Installation of Bro Maurice McGaffin as Worshipful Master on Tuesday 15th March 2016. Maurice was initiated in 2006 and reached the Chair of JW in 2011 before family commitments necessitated his relocation to China, and it was only very recently that he was able to return to England to be Installed as WM.

The afternoon started with the Lodge being opened promptly at 3.30 p.m. by the WM, WBro Terence Rebanks and the admittance of and salutations to WBro David Lightbown, PAGDC, the Representative of the RW ProvGM. The WM then appointed the Installing Officers, most importantly being that of WBro Michael Maunders as Installing Master.

Michael was not only Maurice’s Proposer into Brierfield Lodge but had then Initiated, Passed and Raised Maurice in all Three Degrees (as well as Advancing him in the Mark Degree we subsequently learned).

The Installation ceremony went without a hitch, and Maurice was duly Obligated, Installed and Proclaimed as WM of Brierfield Lodge, after which he appointed and invested his officers for the ensuing year. The Addresses to the WM and the Brethren were expertly delivered and the Lodge was closed in peace and harmony after greetings to the WM from the Officers of UGLE, the Province and Visiting Brethren.

An excellent 5-course festive board was provided by our regular caterer and, as is now the custom at Brierfield Lodge, the tables were arranged in a rectangle with all the diners facing towards the centre instead of the more usual top table with ‘legs’, thereby creating a far more convivial atmosphere.

As our regular soloist was unavailable due to illness, the DC made the ‘executive decision’ that the Master’s Song would be sung by all present and handed out lyric sheets. The result was a truly outstanding success with WBro David Hawkins belting out the tune on the piano, and all agreed that this would be the format for future Installations.

Toasts and responses completed, the final toast of the evening was given by our Hon. Tyler and all except the usual die-hards who partake of a late drink at the bar were on their way home by 9.30 pm.

The meeting of Brierfield Lodge on 16th February 2016 was unusual in that this was only the second occasion in the Lodge’s 58-year history that a Candidate had been Initiated at the February meeting, which is traditionally confined to the business of passing the accounts and electing the WM, Treasurer, Auditors and Tyler for the ensuing year.

Still, nothing is set in stone and since the next available ‘slot’ for admitting a new member would have been the autumn (due to other pending commitments in the Lodge, of which more in a future post), the decision was made to proceed with a ceremony.

The acting WM and officers of the Lodge conducted a near faultless Initiation, witnessed by visitors from Lodges in Padiham, Colne and Burnley. Our newly Initiated Brother Howarth was made to feel very welcome, especially by his Proposer and his Seconder who explained the Lambskin Apron.

The new social board arrangement, where the tables are arranged in a rectangle with all the Brethren facing inwards, is proving highly popular and adds to the sense of inclusivity, especially on such a significant occasion as a new member joining the Lodge.

The meeting of Brierfield Lodge on Tuesday 19th January was a truly memorable occasion, for all the right reasons. The Brethren – including 11 visitors from 7 Lodges – having assembled in the Lodge room, the Lodge was opened by the acting WM, WBro David Biggs, at 7 pm precisely, and the essential business on the summons conducted without delay.

The Lodge was then opened in the Second Degree and Bro. Kevin Sansom was asked the usual questions before Raising which he answered with confidence. Bro Sansom then retired and the Lodge was opened in the Third Degree.

On re-entering the Lodge, Bro Kevin Sansom was raised to the Sublime Degree of a Master Mason by the acting WM, who had also performed Kevin’s Initiation and Passing ceremonies. The Traditional History and the full explanation of the Signs was expertly delivered by WBro Albert Young of Calder Lodge.

The Lodge was closed in peace and harmony at 9 pm and just as we were retiring to the festive board the fire alarm sounded, necessitating the Brethren to evacuate the building, albeit briefly as the alarm was found to be false.

As usual, the festive board was excellent and all except the usual die-hards propping up the bar were on their way home by 10.15 pm, happy in the knowledge that Brierfield Lodge has completed the Initiation, Passing and Raising of yet another first rate candidate.

The next few months promise to be exciting times for Brierfield Lodge and its members. At our January meeting, Bro. Kevin Sansom will be Raised to the Sublime Degree of a Master Mason; in February we have an Initiation ceremony planned when a new member will join our ranks; March is our Installation meeting and in April we have been selected to hold the Hosted Meeting of Padiham Lodges, which will be attended by the RW Provincial Grand Master, Sir David Trippier and the senior officers of the Province.

At the first meeting of the new season on 15th September, Brierfield Lodge was honoured by a visit from our new Assistant Provincial Grand Master, WBro John Farrington, PSGD.

In the absence of the WM on a business trip, the Lodge was opened by the Immediate Past Master, WBro David Biggs, who welcomed WBro Farrington and offered him the gavel, which was politely, but swiftly returned.

There followed a eulogy for our Chaplain, WBro Mike Landriau, who had been called to higher service on 9th June. Officers unable to be present at the Installation meeting were invested and conducted to their posts.

A short talk on the Opening and Closing Odes was then given, after which the business of the Lodge was completed and all retired to the festive board.

A generous bequest from our late Brother, Mike Landriau, provided a drink for all the members and their guests and so ended another happy and fulfilling evening of Freemasonry at Brierfield Lodge.

Brierfield Lodge’s meeting on 21st April witnessed a further step in Bro Kevin Sansom’s progress through the Degrees of Craft Freemasonry when he received a most enlightening explanation of the Second Degree Tracing Board from WBro Roy Langtree of Pendle Lodge.

Roy, who is a regular and very welcome visitor to our Lodge was accompanied on this occasion by the WM of Pendle Lodge, Bro Mark Barlow, and two Past Masters, WBro Steve Jansen (who is also the District Mentor) and WBro Bob Summers.

Bob, as the only visitor who ‘neglected’ to sign the Tyler’s attendance register on arrival was prevailed upon to respond to the toast to the visitors at the social board, which as usual was a convivial occasion and concluded at a sensible hour.